Four people, including a child, were killed in a mass shooting at an office complex in Orange, California

Four people, including a child, were killed in a mass shooting at an office complex in Orange, California, on Wednesday, a police official said. A fifth victim was wounded and transported to a local hospital in critical condition, Orange Police Department spokesperson Lt. Jennifer Amat said at a news conference. Police responded to a call of shots fired around 5:30 p.m. and encountered gunshots when they arrived on the scene, Amat said. Officers engaged the suspect and “an officer-involved shooting did occur,” she said. The suspect was transported to the hospital after sustaining a gunshot wound, Amat said, adding it’s unclear if the suspect’s injury was self-inflicted. One firearm was recovered from the scene and the suspect is in critical condition, she said.
The department did not give any other information about the suspect or the victims.

Orange is located about 30 miles south of Los Angeles. The complex where the shooting occurred houses multiple businesses including Farmer’s Insurance, Calco Financial and Miller Counseling.

It’s not clear where in the building the shooting took place. The FBI’s Los Angeles division confirmed to CNN it had responded to the shooting as a matter of routine, but the Orange Police Department is the lead investigative agency. This is at least the 20th mass shooting since the Atlanta-area spa attacks two weeks ago that left eight people dead. CNN defines a mass shooting as a shooting incident which results in four or more casualties (dead or wounded), excluding the shooter. “I can tell you that we haven’t had an incident like this in the city of Orange since 1997,” Amat said. “It’s just such a tragedy for the victims, their families, our community and our police department.” 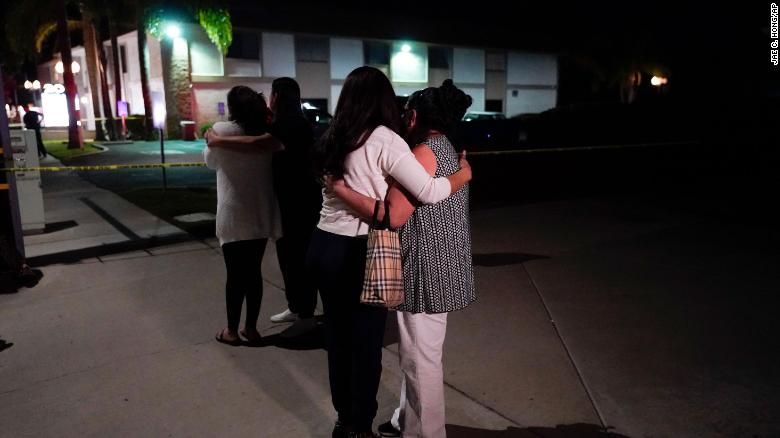 People comfort each other as they stand outside of a commercial complex where a shooting occurred in Orange, California, on Wednesday, March 31, 2021.News of the mass shooting drew immediate condemnation. “Horrifying and heartbreaking. Our hearts are with the families impacted by this terrible tragedy tonight,” California Gov. Gavin Newsom said in a tweet. Rep. Katie Porter, a California Democrat, said she and her staff are monitoring the situation. “I’m deeply saddened by reports of a mass shooting in Orange County, and I’m continuing to keep victims and their loved ones in my thoughts as we continue to learn more,” Porter said in a tweet.