The largest naval flotilla assembled by Britain in recent years will set sail in May on a months’ long voyage through the Pacific, the country’s Defense Ministry said Monday. “When our Carrier Strike Group (CSG) sets sail next month, it will be flying the flag for Global Britain — projecting our influence, signaling our power, engaging with our friends and reaffirming our commitment to addressing the security challenges of today and tomorrow,” UK Defense Secretary Ben Wallace said Monday. “The UK is not stepping back but sailing forth to play an active role in shaping the international system of the 21st century,” Wallace said.
The strike group will be led by the aircraft carrier HMS Queen Elizabeth, marking its maiden deployment. The ship, one of the UK’s two aircraft carriers, is the largest warship the UK has ever sent to sea. Joining the carrier will be two destroyers, two anti-submarine frigates, a submarine and two auxiliary supply ships, a ministry statement said. 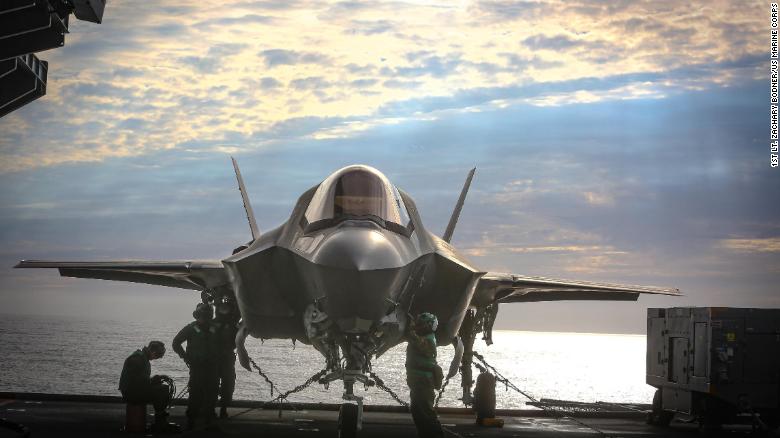 A US Marine Corps F-35 fighter jet is deployed about the aircraft carrier HMS Queen Elizabeth during exercises in September.
A United States Navy guided-missile destroyer will sail with the group as well as a frigate from the Netherlands that will be tasked with air defense, the ministry said. Air power within the group will be centered on RAF F-35B stealth fighters and US Marine Corps F-35Bs, all of which will fly from the deck of the 65,000-ton aircraft carrier. When a version of this carrier strike group sailed together during military exercises off Scotland last fall, the Defense Ministry said it carried “the largest concentration of fighter jets to operate at sea from a Royal Navy carrier since HMS Hermes in 1983.”It also said it was “the largest air group of fifth generation fighters at sea anywhere in the world.” Fifth-generation fighters are the most advanced warplanes in the air.

The International Institute for Strategic Studies says the UK carrier strike group “will be the most capable flotilla deployed by a single European navy in recent years.” “While it will not replicate a US Navy carrier strike group, it will probably be closer to it than anything else that is currently deployable” by any other naval force, the IISS said. Britain in March released a sweeping review of its military and foreign policy, in which it recognized a tilt toward the Indo-Pacific in the coming decade. In Monday’s carrier strike group announcement, the Defense Ministry said the deployment is aimed toward a deeper UK security role in the region, with exercises planned alongside India, Japan and South Korea as well as US forces in the region.

Britain’s aircraft carrier HMS Queen Elizabeth arrives in New York on October 19, 2018.It will also highlight one of Britain’s oldest security relationships, the Five Powers Defense Agreement among Malaysia, Singapore, Australia, New Zealand and the UK. Exercise Bersama Lima will mark the 50th anniversary of the defense pact, the Defense Ministry said. As part of the journey to the Pacific, the strike group will visit 40 countries, the UK Defense Ministry said. The voyage, which will see the strike group go through the Mediterranean Sea and Indian Ocean on the way to the Pacific, will cover almost 30,000 miles (48,280 kilometers), the ministry said.

Britain has not released the exact route of the strike group in the Indo-Pacific, but a planned visit to Singapore will put in on the doorstep of the South China Sea and going through the waterway would be the most obvious and direct route to its stops in Japan and South Korea. China claims almost all of the 1.3 million-square-mile South China Sea as its sovereign territory, and it has denounced the presence of foreign warships there as the root of tensions in the region. When asked in March about the British deployment as well as French military activity in the South China Sea, China’s Defense Ministry said Beijing “firmly opposes any country interfering in regional affairs under the pretext of ‘freedom of navigation’ and damaging the common interests of regional countries. “The UK carrier group is also expected to pass to the east of Taiwan, the self-governed island that China also claims as part of its territory and around which Beijing has been increasing its naval and air deployments in recent months. In its defense review, the British government called out challenges posed by China.

“China’s increasing power and international assertiveness is likely to be the most significant geopolitical factor of the 2020s,” the review said, describing Beijing as “the biggest state-based threat to the UK’s economic security.”The review said Britain planned to increase its military presence around the world.Monday’s announcement of the scope of the carrier strike group reinforced that.”The most significant deployment of its kind for a quarter of a century, it is a visible demonstration of the Royal Navy’s resurgence after decades of contraction,” Commodore Steve Moorhouse, commander of the strike group, said in a statement.”As our nation redefines its place in the world post-Brexit, it is the natural embodiment of the government’s ‘Global Britain’ agenda. And against a backdrop of growing instability and competition, it reflects the United Kingdom’s continued commitment to global security,” Moorhouse said.Japan welcomed the UK’s announcement, saying the carrier strike group’s visit will elevate the longstanding relationship between Tokyo and London to a “new level.”It also said the deployment demonstrates “the UK commitment and Japan-UK collaboration to uphold and reinforce a ‘Free and Open Indo-Pacific’ in the realm of security and defense,” according to a statement from Japan’s Defense Ministry.